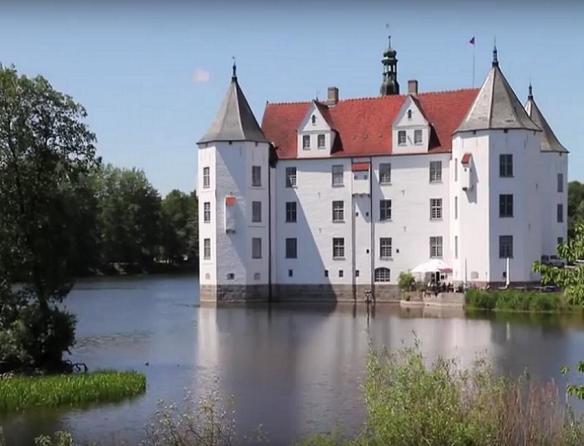 Yonder where the road turns a bend there is a small castle surrounded by a moat.
Glücksburg Castle or in german Schloß Glücksburg
It is the largest german water castle and is located just east of the city of Flensburg.

The moat has a few times been emptied, thereby found an monastery socket.
The castle was built 1583-87 where the monastery was built in the early 1200s.

My inspiration comes from wonderful “Restlessjo” and her “Monday walk” themes.
A walk about two weeks ago.

In 1923 Glücksburg Castle was transferred to a foundation under the ducal family Schleswig-Holstein-Sönderburg-Glücksburg and opened to the public as a museum.
It includes, among other things, a comprehensive collection of historical works of art, tapestries, porcelain and furniture.

The castle or genus from the castle has lines to all parts of Europe.

The english prince Philip married to the queen Elizabeth is part of the genus too.
A member of the family was taken to Denmark as king in 1863 as Christian 9th..
He was later called the european father in law coz his 6 children were spread in Europe.

Frederik 8th, king of Denmark (his son Carl became king of Norway as Haakon 7th)
Alexandra, queen of Great Britain
Georg 1st, king of Greece
Dagmar, empress of Russia
Thyra, duchess of Cumberland and crown princess to the Kingdom of Hanover.
Valdemar, prince was offered to be king in Bulgaria but declined.

Christian 9 were not lucky as reigning king
the next two kings, his son and grandson were not better
they were the cause of the danes put them outside political influence.
Thus was the danish royal family alone representative figureheads as it still is.

Castle chapel is impressively designed.
It functioned until about 50 years ago also as a parish church.
Now it can be rented for weddings.

Do you wanna dance.?

Nowadays no one would call this a luxury bathroom.
But once this was the most ultimate of the ultimate.