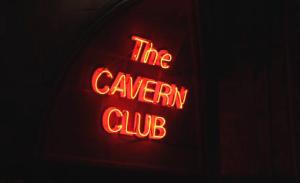 The Cavern Club is a night club in Mathew Street, Liverpool
opened in 1957 and it’s steeped in musical history and intimate coziness
lots of musicians have played here before they became famous
and many have returned after they have got stardom
The Beatles
The Who
Eric Clapton and The Yardbirds
The Queen
The Rolling Stones
The Kinks
Elton John
Jan. Akkeman and Focus
David Gilmour (from Pink Floyd)

Cilla Black worked as a hat-check girl there before she get famous.

In 1960 there was a performance by Rory Storm and the Hurricanes
(which included Ringo Starr as drummer, it was before he became a Beatle).

Paul McCartney, David Gilmour and Ian Paice playing at the Cavern Club in 1999
the video isn’t recorded by me
but actually I was in the crowd that night in 1999.

It could be called “Deep Pink Beatles”